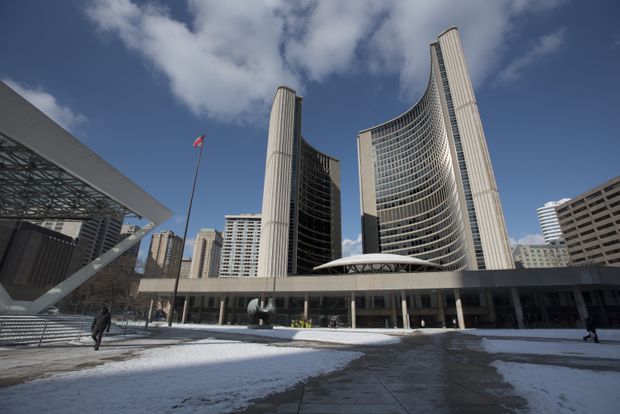 City Hall in Toronto on Feb. 6, 2018.
FRED LUM/THE GLOBE AND MAIL
Toronto’s smaller city council must streamline its committee structure and cut the number of politicians assigned to oversee everything from its transit agency to its zoo, according to a staff report.
The new council – slashed to 25 members from 44 in the middle of the election campaign by Ontario Premier Doug Ford – meets next week for the first time since the Oct. 22 vote. At the meeting, councillors are set to debate a long list of recommendations on how council should work drawn up by city manager Chris Murray and city clerk Ulli Watkiss and released on Wednesday.
Previously, Toronto city councillors filled hundreds of seats on boards, commissions and agencies across the city – overseeing everything from hockey arenas to community theatres. They also sat on various committees at City Hall that do everything from scour the city’s $11-billion operating budget to approve new parking spots.
The report calls for a series of temporary reforms, including consolidating council’s seven standing committees into just four, while setting up a new special committee of council to study permanent changes to the way council operates.
However, some councillors feared the proposals would hand too much power to Mayor John Tory.
Councillor Gord Perks, who represents Ward 4 (Parkdale-High Park) and is a left-leaning critic of the mayor, points out the report calls for cutting the number of council-appointed who sit on a long list of bodies, including the boards of Toronto Community Housing Corp. and the Toronto Public Library, but the proposal also maintains the mayor’s ability to appoint a member to such boards as his designate.
That, Mr. Perks says, effectively strengthens the mayor at the expense of council: “If you apply what I always call the Rob Ford test, which is when you had a mayor who couldn’t function and council had to take over his role, do you want to give new powers to that guy?”
He criticized Premier Ford for imposing the 25-member structure on the city, which Mr. Perks argues will only make Toronto politicians more removed from their constituents as they deal with citizen complaints and contentious high-rise development applications in wards that are now twice as large, with an average population of 110,000.
Councillor Paula Fletcher (Ward 14, Toronto-Danforth), who like Mr. Perks is to the left of Mr.Tory, said she is concerned the smaller council and new structure will make it harder to oversee the city’s various agencies, some of which spend hundreds of millions of dollars, as well as the city’s own operations with just four standing committees.
“This is direct product of the … Ford meddling in the city,” she said. “We’re having to shrink some of our accountability functions.”
STORY CONTINUES BELOW ADVERTISEMENT
STORY CONTINUES BELOW ADVERTISEMENT
Mr. Tory, addressing reporters at a groundbreaking ceremony for the massive Port Lands flood-protection project on Wednesday, said he believed the staff report is a thoughtful approach to restructuring council.
The mayor also repeated his call for an increase in councillors’ $240,000 staffing budgets so they can hire more aides to help manage their much-larger wards.
“The number of people being served, which is close to three million in the city of Toronto, has not changed,” he said. “They still need customer service, constituency service. There are now fewer people to serve them.”
The staff report lays out four options regarding council staff and office budgets. Keeping the current staffing levels for councillor aides would save $7.4-million compared with 2018. But it is widely expected that council will approve increases, potentially all but eliminating the $25.5-million over four years that Mr. Ford promised his reduction in council size would save.
Asked on Wednesday at a news conference whether a move to boost councillors’ budgets negates the promised benefits of his plan, Mr. Ford asserted that the cut to council would end up saving millions in “efficiencies.”
Gabriel Eidelman, an assistant professor at the University of Toronto’s Munk School of Global Affairs and Public Policy, says he hopes the appointment of a special committee to reform council means the committee takes another look at the changes he and a group of experts – including former councillors and senior civil servants – recommended last year to make council run more smoothly.
STORY CONTINUES BELOW ADVERTISEMENT
Among them were procedural changes that would limit the ability of councillors to spend lengthy periods asking questions of city staff at council meetings, and require mayors to give a kind of annual throne speech to clearly outline their priorities.
“This can’t just be what’s presented here, about rearranging the deck chair,” Dr. Eidelman said. “ … We should take this opportunity to think more deeply about what the city needs going forward.”